Mortar is an old school thrash band from Kolkata, India. Led by guitarist/vocalist Samrat Daas, this Bengali thrash brigade is influenced mainly by the rampaging sounds of Teutonic Thrash bands such as Kreator, Sodom as well as other old school speed/thrash bands. They arrived on the scene last year with a series of highly energetic live performances and demo tracks which soon manifested itself in physical form with the Ground Reality EP. The band is part of a metal renaissance on both sides of the Bengal border and holds a promising future. I managed to catch Samrat online while he was taking a break from all the shredding and shouting of war chants, and he was happy to answer my questions.

– Hey Samrat. I’ve been wanting to interview you since back in the day when Ground Reality’s demo version hit Youtube! How’s everything?
The skies are calm now. Just gearing up for the upcoming gig and shredding some new riffs for some new materials.

– Since Mortar has formed, the band has had somewhat of a chaotic existence. Lineup changes and everything always coming at the forefront. How’s the ride been and are you still as motivated to make neck-breaking thrash as you were in the beginning?
Great question indeed. As we find many musicians getting frustrated after not finding fellow band mates, they quit. But i have been biting my teeth together since the first day and will continue to do so. The entire band’s luck has been very unforgiving since day one but we still rise up from the ground and continue to make kickass music. Hope the current lineup stays intact for a long time and we can give you some neck breaking thrash songs.

– You put out an EP called “Ground Zero” featuring the original lineup, earlier this year. How was it received and how do you look at it now that a lot of time has passed?
Ground Zero made us come into existence, in the metal circuit as thrashers and rebels. If im not exaggerating, people from Germany and Sweden have been mailing into our email and congratulating us for making a kickass EP. I listen to the EP from time to time and it feels like there could have been a lot of changes to it. There were a lot of criticisms also, but hopefully we have managed those and we promise to learn from our mistakes. Improvisations are always an ongoing process.

– You were on the Motorhead India compilation where you decided to take up vocals. What inspired the decision to switch to the mic as well as guitars?
Well, many people are responsible for it. First of all, my brother in war, Indranil ‘Vicky’ Dasgupta has been with me for a long time and has been a well wisher of Mortar since the beginning. Along with many fans, he too complained about the vocals and pushed me for doing it. At first, it sounded like a joke because I singing is equal to a glass shattering experience. But, one fine night i tried to play Riot Of violence and started singing with it. Jumped off my chair and tried couple of songs that night. Maybe because of too much drinking or something, within the next few days, we re-recorded the Motorhead cover, I am the Sword and the end result was in front of everyone. 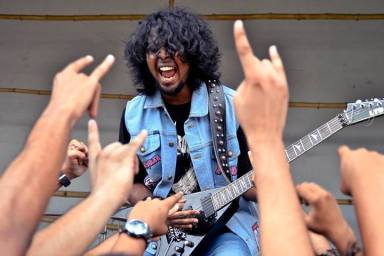 – The Kolkata scene has shot up in the last few years. Tell us a bit about the metal scene in Kolkata, and your ‘Kolkata Old School Metal Association.’
KOSMA was formed by Avijit ‘Corpsegrinder’ Shyam and me in order to get everyone listen to the stuffs we hear. We started our garage gigs in February this year and already the year 2013 will be seeing 3 gigs by KOSMA. That’s an achievement allright, considering the poor audience turnout in this city and lack of interest among youngsters. If our speculation is right, then we might be able to bring outstation bands from our next gig and give them a great show.

– You’re on the bill for KOSMA’s Hard N Heavy gig. How have previous Mortar and KOSMA gigs been recieved?
As i said, audience turnouts are very less over here. There are 2 old school groups in Kolkata. KOSMA and Putrid Ascendancy. The people who come to both the gigs are same in numbers. So, we face the problems of low budget gigs, bad sound and lack of proper venues. Someday, hopefully, sun will shine more brighter over the city of joy and we will all be happy and gay.

– Tell us a bit about your side-project Steelbird.
Well, its a cover band i do with Vicky where we try out the songs we like. Nothing much to say about it.

– What’s in the future for Mortar? Any new material in the works?
A lot of songs are getting written and lot of riffs getting prepared. Wait for it.

– You’re a modern day band that plays old school thrash, like a lot of other bands nowadays. Who are your favorites from the current crop of thrash bands?
Current favorites will be Hexen, Gama Bomb, Evil Whiplash and definitely Warbringer, to name a few.

– Thanks for the interview! Hope to share the stage with you sometime within the next decade! Any parting words for the reader?
Thank you Hassan a lot for conducting this interview. Get your stuff together with Foreskin and visit India soon. Lets kill posers together. To anyone reading this, thank you for supporting the scene. No really, Thank you.