Among the slew of literature and film coming out about heavy music, Destroy Cleveland interested me due to its focus on a certain scene rather than an entire country or continent. Cleveland Hardcore of the 80s and 90s has gone on to influence bands all over the world, from Belgium to Nepal, Italy to Singapore, and whatnot. I decided to hit up Matt Greenfield, the man behind this project and interview him for the zine. 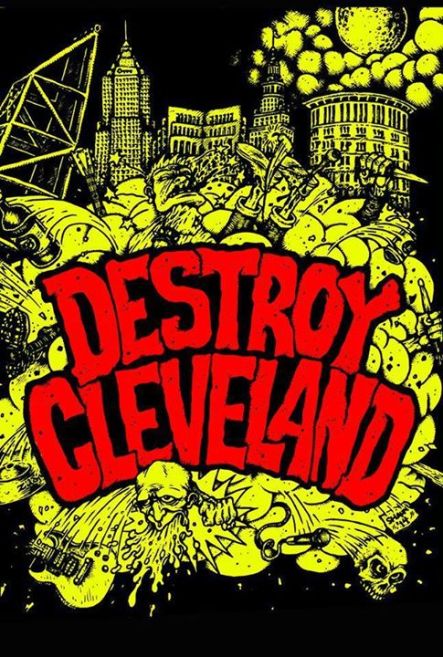 Pretty great! Working at my day job and working on movie stuff simultaneously.

– Tell us a bit about your documentary “Destroy Cleveland.” What did Cleveland Hardcore mean to you and what prompted you to make a film on it?

Destroy Cleveland starts around 1987/1988 with the emergence of bands like False Hope, Confront, and Outface. From there it moves forward towards bands like Integrity, Ringworm, Face Value, and One Life Crew. The second half is about the 90s DIY bands like 9 Shocks Terror, Apartment 213, Cider, Puncture Wound, etc. I delve into the early 2000s with Upstab and give props to the new generation at the end but that’s pretty much it. There’s already another documentary floating around that covers earlier Cleveland hardcore.

Cleveland Hardcore means everything to me. This film is my life and so is the music. My world changed the first time I heard 9 Shocks Terror and from that point I just delved in deeper and deeper. Seeing the last Gordon Solie Motherfuckers show at Speak In Tongues was a defining moment for me. I grew up in Youngstown, Ohio, so going to shows at Speak in Tongues or checking out 9 Shocks at random places was almost like a mythical experience. I was a young, shy kid so I didn’t talk to people in the bands back then. I just built up mystery around them.

I was at work one day and thinking about how someone should make a documentary on Cleveland Hardcore. The next day it dawned on me that I should be the one to make it. I contacted my friend’s Colby Grimes and Jorge Matthew Delarosa in Kent, Ohio, and asked if they wanted to be involved. That’s how everything started.

– Can you tell us about a few of the bands featured in this documentary? How receptive were they to the idea?

I have members from most of the crucial bands; Integrity, Ringworm, Darvocets, Inmates, etc, etc…I could go on and on. The scene is very incestuous when it comes to bands. I’m not referring to them sleeping with their relatives, I mean they share a lot of the same members! Everybody has been really receptive for the most part. It was hard to get Dwid at first because there was a lot of indirect miscommunication going on. People who were ill informed told him the documentary would be attacking him and was centered around two guys who don’t like him and haven’t for twenty years or something. I’m friends with one of the guys who will remain nameless and he never even mentioned Dwid during his time on camera. The other fellow I have only met one time in my life. Once we talked and cleared the air, he was very interested. Dwid has been a great help and is a really cool guy, not the character I hear in all of these horror stories from people. Some other bands that I think are important that are in the documentary would be Outface (members went on to be in Filter and Sepultura) and H100s, and really just a bunch more. I’m afraid some bands will be left out but I’m doing my best to include most. I was never into Mushroomhead or that kind of stuff. No offense to those dudes or anything. I’m sure they are nice people.

– How is the funding for the film being achieved?

Out of my paychecks and out of Jorge and Colby’s pockets. We raised a few hundred dollars in the beginning which was cool. It covered the cost of one of my many trips from Texas (where I live) to Ohio. This is definitely a labor of love. I have nothing to gain from making this movie. I just want to shine a light on what I feel is one of the most important things to ever happen in the history of music. Cleveland hardcore is like nothing else.

– What about the Cleveland Hardcore scene made it different back in the day from the other places in the USA, and does that still hold now? Any specific environmental or socio-political reasons that gave Cleveland a distinct atmosphere from say the Bay Area or New York?

Cleveland has had strong music for damn near 70 years! It was also an important place for the birth of punk. You had bands like Devo, The Pagans, Dead Boys/Rocket from the Tombs, Pere Ubu, and The Cramps come from around the area. The early 80s had incredible hardcore such as The Guns and Starvation Army. By the mid 80s, of course there was a new group of weirdoes ready and willing to carry the torch. It’s a blue collar city that was in economic shambles. Cleveland’s a gritty, industrial place that breeds rough, wild characters. The weather sucks and people say there is something in the water.It’s fertile grounds for brilliant, angry music. NYC was a bustling metropolis with many artistic options for young people. The Bay Area is awesome; the weather is nice and there’s a ton of people with money. It still has a radical history though. The Black Panthers did great work in Oakland and Berkley but as for punk and hardcore , I don’t know. I can’t really speak on it besides being a fan of certain bands. I’m sure lots of people had rich parents though. 924 Gilman and all of that stuff is really politically correct. Not many people in Cleveland hardcore make political/politically correct music and surely there are only a handful of vegans from the bands in the documentary. Not to say the people are uneducated by any means. Lots of the dudes and women are well read lefties. The only right wing band is probably One Life Crew. Personally, I am not a Republican but I think One Life Crew is a fun band. This movie isn’t about politics. Cleveland is a fucked up city when it comes to police brutality though.

– There’s a sudden upsurge of literature written and documentaries made on the smaller local extreme music scenes across the world, in recent years. What do you think has led to this?

– Have you worked on any other films prior to this?

Never, but I would love to do another one after this one

– What are your future plans once Destroy Cleveland is wrapped up?

I want to find distribution for the movie but right now I really just want to put it out myself. I know I can do a good job. Jorge’s company The Slow Mutants and my own Rust Belt Hammer are the “producers”. I will tour DIY style on weekends and premier the movie all over the country. All over the world if I have the means. It will come out on DVD this summer and no time will be wasted getting it in people’s hands. This is a very grass roots movie and movie campaign. DIY!

– Any new Clevo bands that you would like to recommend to the readers?

Thanks for the interview. If people want to follow us, it’s “Destroy Cleveland” on Facebook. Thanks to Jorge, Colbster, Earl, Jill, Joseph, Dan, and anyone that has done any sort of work on this movie.