– You guys put out the “Abandoned” EP in October, how has the reception been to it so far?

It’s been good. We’ve sold out of all the cassettes fairly quickly and people have been very supportive by buying it digitally from our Bandcamp page. This release is sort of interesting in a way, because the music is actually about 4 years old, but we just put it out, so people see it as a new release even though it’s more or less just B-sides from ‘Die Miserable’. In general the reviews and feedback has been positive. I like to read a review or get feedback from someone that’s actually listened to it without any bias, and this is really hard to find. Often it’s people that like it because they like the band or hate it because they hate the band, but every once in awhile I read something (positive or negative) that is actually a genuine review where the person is listening and making an effort. It’s not like we’re going to change what we’re doing because of what people think, but it is interesting sometimes to see how other people dissect your music.

– You’ve mentioned before that you find the ‘technical grindcore’ tag a bit of an oxymoron, how would you describe your music then? Taking into the fact that there’s a bit more to FTF than the average grind band.

We probably are ‘technical grindcore’, at least on this release. When FTF started back in the late 90’s as a recording project, grindcore was definitely the main influence, but over the years we’ve changed and developed our sound. I wouldn’t really call what we do ‘grindcore’ the influence is definitely still there, but we don’t sound like Rotten Sound or Magrudergrind. I coined the term “bastardized grindcore” to sort of address that, but really does it matter? We make the music we like and do what we enjoy. If there’s blast beats, cool! If not, cool! Personally, I really enjoy dynamic music. I listen to a lot of different music at home and an album with a lot of peaks and valleys is usually what keeps my attention and makes me what to listen to it again. That’s what we’re trying to do with FTF. Make interesting music and albums that we would want to listen to.

– FTF has had pretty much the same lineup since 2009, and the stability has caused arguably your best material to come out – is that something you would agree with?

Yeah, I’m very happy with the music we’ve been creating and I think that we’re really at our best as a live band right now, and a lot of that has to do with us having a solid line-up for so long. It’s actually since 2008 that it’s been the same 5 people, so that’s about 7 years now. We also have more input now from all members when it comes to writing. I used to do about 90% of the writing in the band, but now the music is split pretty evenly between the 4 of us with Mel still handling the majority of the lyrics.

– We’re a blog/zine that normally covers South Asian metal/punk acts, and your position as a Bengali origin man who formed one of the more ‘known’ grind acts is one that piques curiosity. Did your parents, or close family members, ever expressed any sort of repulsion towards your music in the band’s nascent days? Because that seems to be the trend with our diaspora.

Well, I’m only half-Bengali (on my father’s side). My mother is Czech and my dad actually moved to Czechoslovakia when he was only 16, so even he wasn’t the most Bengali guy in the world. I’m proud of my background, and I have visited both India & The Czech Republic, but I’m as Canadian as they come. I was born here and grew up playing hockey and watching Kids In The Hall. Both my parents were always extremely supportive, and still are to this day. I wouldn’t have a studio if it wasn’t for my mom, and my dad was always at my shows when I was younger. Never at any point did my parents try to talk me out of doing this. If anything, they encouraged me to keep going. I’m sure my mom will end up reading this interview.

– Do you feel there is a lack of South Asian/Desi/ origin guys and girls in Grindcore bands in North America?

Growing up in the scene in Ottawa, I was the only brown guy playing in bands with all these white dudes, but it was never a problem or weird in anyway. Now things are a lot more mixed, and I think a lot of that has to do with how much more popular this kind of music is getting. It’s something that’s out there more and people are discovering it all the time. It’s not an underground secret anymore. I’m never going to say that I think there needs to be more brown people in bands, or more women, more disabled people, etc… The scene is welcoming and if you want to make music you’ll find your place, regardless of what you look like or where you’re from. 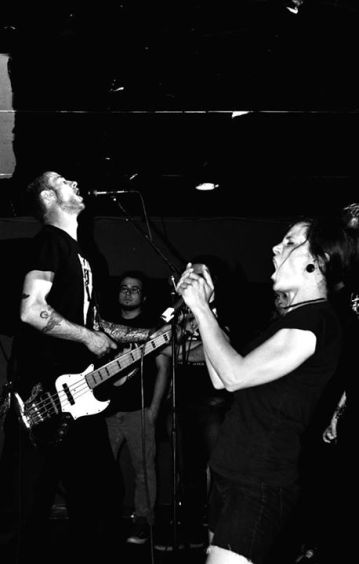 – You also have a prolific noise side to you, the last solo split you did was with Takashi Ohkawa if I’m not mistaken. The noise side also seeps into FTF’s material. Is Noise something you can divorce from your grind side, or is it part and parcel of the package?

I started doing noise with FTF. Some of the very first FTF releases were just straight up noise releases. When FTF became a band we still did this a bit, but definitely not as much as in the beginning. It’s always been an influence and you can hear it on pretty much all of our releases. I started a project called Merdarahta, and that’s pretty much where I rekindled my interest in making noise. I’ve also been doing noise shows and releases as a solo artist for the past year now, and it’s something I really love doing. As much I love grindcore and metal, I’ve always had a big interest in more experimental music, so you get to hear that in FTF a bit, but with my solo work and Merdarahta, I can really dive into the deep end of making weird music.

– Having been involved in the grindcore community for such a long time, do you think the music and the scene has changed much over the years?

Sure. Like I said, grindcore is more popular than ever now. It’s not this underground elite thing anymore, so you have more people discovering it. Now with the internet we have everything at the tips of our fingers and interaction with others in the community is instant. I used to dub tapes and send them out with letters around the world. It could take weeks or even months before I would hear back, and I was spending sometimes hundreds of dollars a month just on postage. I don’t miss that. Right now as I write this interview on my laptop, I can remember 15 years ago getting a letter in the mail with interview questions for a zine. I would write out my answers by hand and mail them back, then maybe a year or so later I would get a copy of the zine. Recording is now something that a lot of us do on our own, and at a pretty good quality too. You used to have to go to a real studio, or have a really rough 4-track recording. So yeah, a lot has changed. I’m not going to say it’s better or worse, it’s just different.

– Thanks for the interview Topon! Come play out in our neck of the woods some time.

Thank you! And yes, we can’t wait to make our way out there. Cheers!

Fuck the Facts on Bandcamp